Dave Fuehrer Helps People with Cancer, Inspired by his own Journey 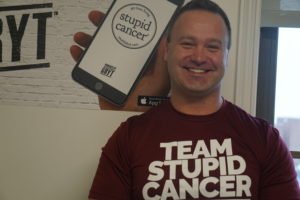 There’s a warmth that’s readily apparent with Dave Fuehrer. His smile is infectious, his interest in you genuine and his sympathy obvious for the people who make his company possible. And for good reason. To him, GRYT Health is more than just an app development company. It’s a deeply personal pursuit of making life just a bit easier for people who have gone through experiences similar to his.

“We never expected to start a company,” said Fuehrer, co-founder and CEO of the business. “Four-and-a-half years ago we created an app called Instapeer, and the purpose of that app was to connect people who had cancer in their younger years with other people who know what they’re going through.”

In 2002, during Fuehrer’s senior year at RIT, he was diagnosed with testicular cancer. He survived, but five years down the line he was diagnosed again. He survived again and then saw cancer take his father. Worldwide, cancer comes knocking for about 14.1 million people per year, about 340,000 people in the U.S. alone, and with it comes pain and, as Fuehrer’s work focuses on, loneliness.

“The hardest part of everything, for me, was that I could never find another two-time testicular cancer survivor, let alone another two-time testicular cancer survivor who also lost his dad,” Fuehrer said. “So we just wanted to create an app that made it so other people didn’t have to feel alone, and that app turned into something that was supporting people all over the world, which then meant we had to build an organization that could actually grow it, and then improve it.”

GRYT’s app is now the official app for Stupid Cancer, a nonprofit company specializing in advocacy, research and support for young adult cancer patients and survivors. People from all over the world log into the app and can meet someone who’s going through the same life experience. The person might live right down the block or in Australia, but the shared experience defies borders and cultures, as Fuehrer explained.

He pulls up a map of the app’s analytics, translucent concentric circles littering the entire topography.

“We have people all over the world, from China, Australia, all over Europe, in Africa,” Fuehrer said. “These are people on the app in the last week, and the fact that as you and I are sitting here, there’s someone in Australia connecting with someone in France, blows my mind. It’s the power of technology.”

“It’s authenticity,” Fuehrer said. “We’re not a technology company, we’re a connection company. You can’t support someone truly, in an authentic way, if you can’t meet them there.”

It was Fuehrer’s time at RIT, where he received an undergraduate degree in communications and an MBA in technology management, that he was first diagnosed with testicular cancer.

“It was February, and I went to health services at RIT because I thought I had pulled a muscle, and they actually said ‘we’re too busy today, could you come back tomorrow?’ and I told the girl at the counter that I don’t think that’s what this really is,” Fuehrer said. “So they got me in and sent me for a CT scan, and I was diagnosed that day.”

Fuehrer credits his time at RIT for helping him not just survive but thrive.

“If I think about what shaped me in life while I was going through cancer as a young adult, RIT was teaching me how to communicate, and how to use technology to bring people together,” Fuehrer said. “That moment in life was what enabled everything I am now, everything I do now, to help others.”

As far as connections go, a subject Fuehrer is adamant about, it’s not just about people-to-people support connections. According to the site analytics, since Oct. 1, 72,934 had met someone like themselves, 60,004 first messages had been sent, 46,854 public messages had been posted and 39,856 had been created. But it’s also about meeting people who can help in other ways, such as fertility. It’s a sensitive subject for Fuehrer, who lost his ability to have children due to cancer.

“What this is doing is allowing us to support individuals and connect them with tools,” Fuehrer said. “So if they’re looking for fertility, preservation, we can provide them with fertility resources, if they’re looking for treatment options in a hospital, we can let them know what treatment options exist in a hospital. Basically, we can let you know what’s around you, even though you might not have access to it in your backyard.”

Today, Fuehrer is cancer-free, and he strives to live his days to the fullest. Two bouts of cancer, a first wife who left during his struggle and a lost father, Fuehrer has persevered. He now treasures the time with his family and his wife, Rene. And his work with GRYT, spelled with a “y” because “there’s no ‘i’ in GRYT,” he says with a firm tongue in cheek, has given him a new drive, an ability to provide a resource he wished he had during his struggle—to bring the people cancer ravages together.

The Stupid Cancer app is currently available on iOS. The Android version is set for release at Stupid Cancer’s 2018 Cancer-Con, April 19 to 22 in Denver.

Hobbies: Spending time with loved ones, living life to the fullest

Quote: “We’re not a technology company, we’re a connection company.”